Prices are already 16% than the 5-year average and the number of pigs available exceeds buying interest.

With China taking less pig meat from the international market, the EU market seems overflooded with pork, a situation that dropped pig meat prices by 24% compared with October last year and by 16% from the 5-year average. The current average price for pig meat in the EU is €129.44/100kg and it could fall further as no significant reduction in the pig herd has been reported in the last few months.
Pig meat prices have fallen constantly since June, a moment when the largest buyer of pork from the EU, China, has reduced the volumes imported due to higher domestic production levels. (see EU average pig reference price chart below) 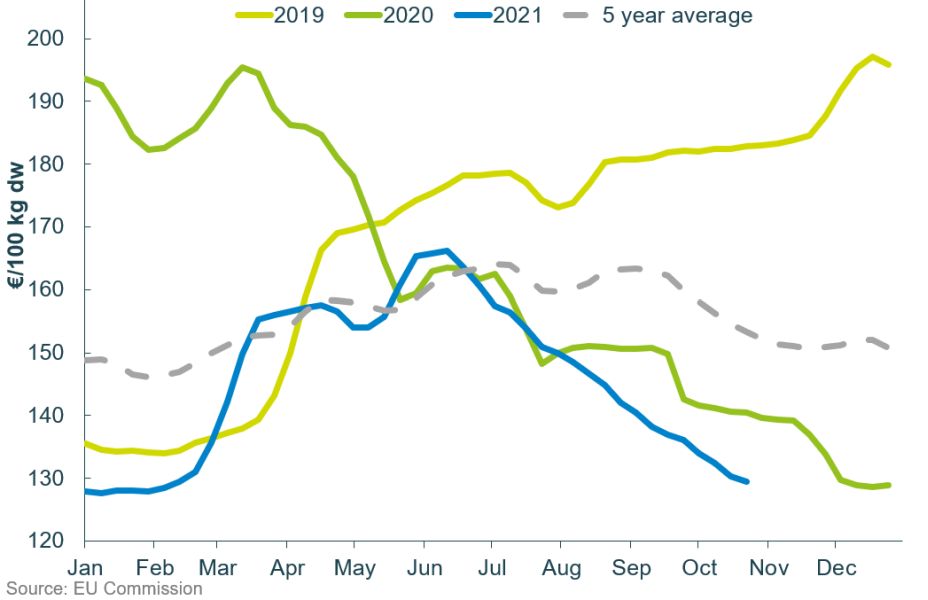 "The latest census results from the summer did not indicate that a significant tightening in EU pig numbers is imminent, and market reports continue to suggest that the number of pigs available exceed buying interest. The previously strong Chinese export market has cooled, leaving more pork to be traded domestically where demand remains sluggish. Without some stimulus from the export market, it is difficult to see the situation changing significantly in the short to medium term," said a recent ADHB analysis.
Recently, Danish prices have been relatively stable compared to other Member States, however, prices fell more sharply earlier in the season. n contrast, prices in Spain have continued to fall more than the overall EU average, dropping by 10% in the latest 4-week period. The latest average for the week ended 24 October is €130/100kg, a sharp contrast to the €190/100kg figure achieved during the summer peak. "Spain is a key exporter to non-EU destinations, and this highlights the impact of the weakening Chinese market," commented Bethan Wilkins, senior analyst, ADHB.

The Cobram facility will operate five days a week with a capacity to process up to 4,000 head of ...

Continued rainfall and favourable seasonal conditions seen last year will ensure that there will ...

VanDrie Group will acquire a majority stake in Gosschalk

Chile is the main buyer of the Paraguayan meat in 2022

AHDB will attend the Annual Meat Conference in USA