Cultivated meat market may reach a value of $25 billion over the next decade, according to a market analysis released by McKinsey. "Since developing the first prototypes, companies have been able to reduce production costs by 99%. In late 2020, at an upscale club in Singapore—the only country thus far to approve consumption of cultivated meat—diners feasted for the first time on crispy sesame chicken with the central ingredient grown from animal cells. Regulatory bodies in the United States have announced agreements to regulate the product, while the European Union awarded a multimillion-euro grant for research. The industry, which at present comprises fewer than 100 start-ups, attracted roughly $350 million in investments in 2020 and about $250 million thus far in 2021 from some of the largest animal-protein players, including Tyson and Nutreco, and well-known investors, including Temasek and SoftBank," says the report.
However, the estimates on the market value are ranging between $5 billion and $25 billion, depending on the growth scenario: low, medium, high. 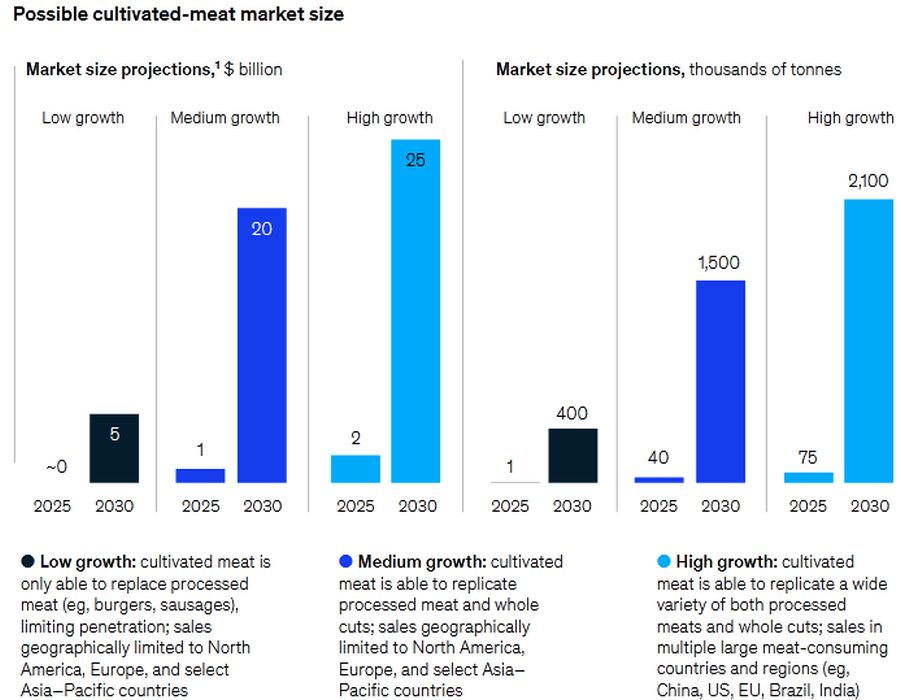 Reaching a $25 billion cultivated meat market by 2030 will require the annual production of 1.5 million tonnes of cultivated meat. At current levels of cell-culture productivity, the industry would need anywhere from 220 million to 440 million liters of fermentation capacity, enough to fill 88 to 176 Olympic-size swimming pools. Considering that the pharma industry’s current cell-culture capacity is estimated to be between 10 million and 20 million liters5 (less than ten swimming pools), it will take a massive capital build-out just to reach 1% of the protein market.

The future pace of adoption and market size will depend on five key factors:
— Consumer acceptance. Will diners dig into cultivated chicken nuggets and burgers and, eventually, filet mignon and salmon steaks?
— Risks. How will the industry address concerns about health and safety, jobs, and possible economic ripple effects?
— Cost position. Will cultivated meat become a bargain, relative to conventional meat, energizing demand?
— Policy response. How will countries and regions address the development of this new industry?
— Supply. Will the world make enough cultivated meat to achieve economies of scale?
However, the estimates on the market value are ranging between $5 billion and $25 billion, depending on the growth scenario: low, medium, high.

At the same time, the animal-protein market is growing 1 percent annually, with volume expected to reach 531 million tonnes by 2030. See how the animal protein market looked, by region, in 2019. 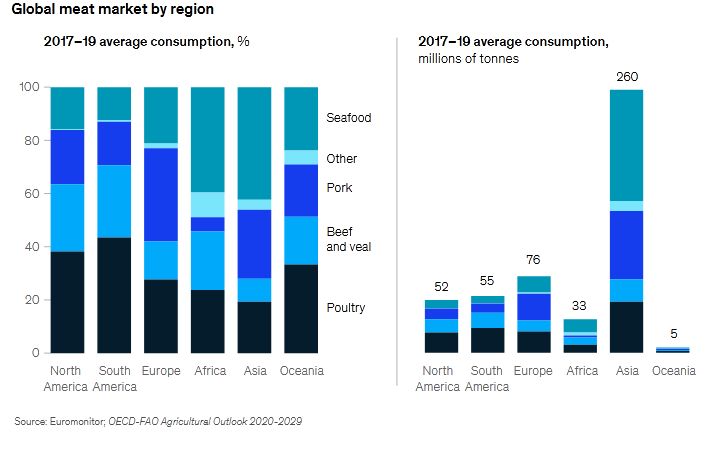 In an optimistic scenario, lab-grown meat could cover 0.5% of the animal protein consumed at the end of this decade.

As recently announced in partnership with the Tropical Forest Alliance, JBS is leading Brazilian&...

For Alberto Herranz, director of INTERPORC, "it is a source of pride that this prestigious award ...

OG REDaPORC: Biosecurity as a tool for antibiotics reduction