18,900 birds were culled to stop the disease from spreading. Europe is confronted with an AI epidemic that is no longer seasonal, warns experts.

Spain has reported an outbreak of the highly pathogenic H5N1 bird flu virus on a farm north of Madrid, the World Organisation for Animal Health (OIE) said this week, adding to a wave of cases in Europe.
The outbreak started on January 13 on a farm of 18,900 birds in the village of Cantalejo, OIE said, citing a report from Spanish authorities. "The epidemiological survey conducted on the farm indicates that all the birds were brought onto the farm for fattening at the beginning of November 2021, with no animal movements outside of the farm since then," the report says. A restriction zone had been established around the outbreak.
According to the German animal health institute Friedrich-Loeffler-Institut, the Highly pathogenic avian influenza (HPAI) seen in Europe for the last two years is no longer seasonal, a fact that is sustained by the ongoing outbreaks reported in countries such as Russia, Ukraine, Poland, etc. The current wave started in October 2021 and has already impacted 30 countries in the region. German experts also warned that the end of the bird flu epidemic is not yet in sight. Prior to the outbreak reported by Spain, the situation in the EU is illustrated by the map below. 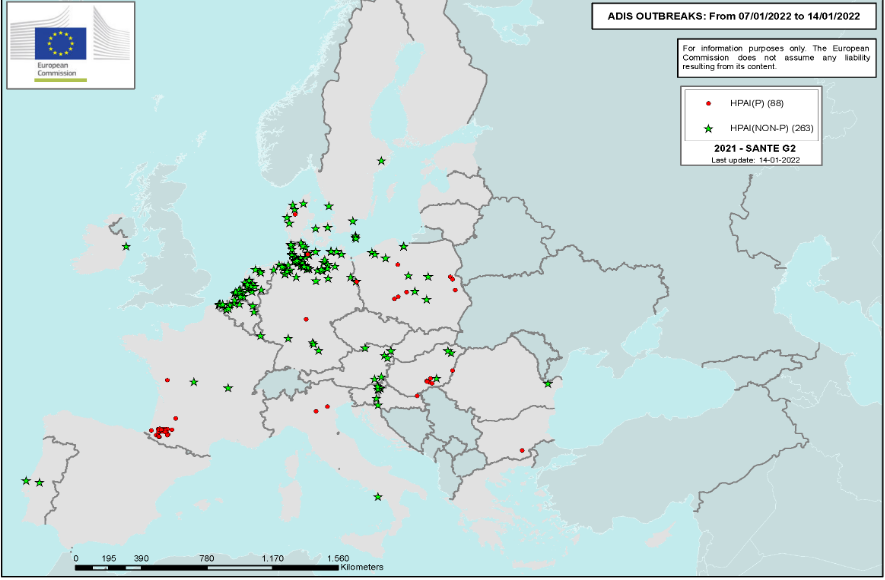 In France, a total of 2.5 million birds needed to be killed as the southwest of the country faces several outbreaks of bird flu. Around 1.2 million animals have already been culled, according to the French Ministry of Agriculture, and an additional 1.3 million still needed to be killed as a precautionary measure to tackle the virus.
The spread of highly pathogenic avian influenza, commonly called bird flu, in Asia and Europe has raised concern among governments and the poultry industry after previous outbreaks led to the culling of tens of millions of birds and trade restrictions.

The government of Malaysia seems ready to step up the level of food protectionism by putting a ba...

Marel adds a fourth pillar to its business model