Germany, Belgium and the United States are the main markets for live animal exports from the Netherlands.

Last year, Dutch farmers exported live animals worth €1.8 billion. Pigs represented the highest export value at 795 million euros, followed by poultry (€310 million). Most live animals are exported to other European countries. Exports to Germany are the highest, at nearly €742 million. With over 70%, the bulk of this amount is on account of pig exports. Almost half of exports to Belgium (total value of €276 million) consist of cattle.

Outside Europe, exports of live animals to the United States are the highest. This country ranks third among the most important export markets. This is mainly due to the high export value of horses, donkeys and mules (€142 million). Spain and Italy complete the top five of destination countries for live animal transport (see chart below). 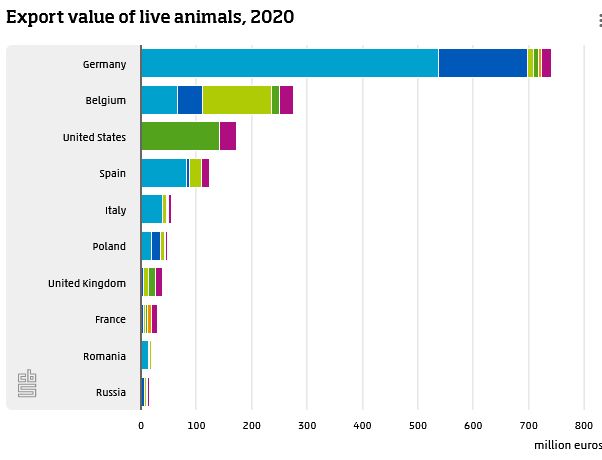 As for live animal imports, neighbouring countries Germany and Belgium are also the most important trade partners. The top ten countries with the highest import value are exclusively European. Last year, the import value of live animals stood at €1.1 billion, mostly poultry (€601 million). Of these imports, €574 million (51%) came from Germany and €332 million (29%) from Belgium. Poultry accounted for 71% of the value of imports from Germany.
Pig imports represent a much lower value than pig exports. Pigs are mainly imported from Belgium (€50 million), Denmark (€33 million) and Germany (€23 million).

Spain has reported an outbreak of the highly pathogenic H5N1 bird flu virus on a farm north of Ma...

USDA analysts are expecting a sharp decline in pig production in Thailand. As the last Asian stro...

AIC Mikhailovsky, part of Cherkizovo Group, acquired a 50 % stake in the authorized capita...

Week of the rabbit in Belgium

STUDY: How to produce quality beef and reduce methane emissions?

Nigeria partially opens the market for US pork