The European Commission is carrying out an impact assessment of the current food promotion policy. Red meat may be excluded from the promotion funding programme.

The European Commission is taking into consideration a ban on red meat promotion funds, which is supposed to limit the impact of animal farming on the environment. However, the meat industry in the EU believes that, in the end, such a decision will only hurt farmers and consumers. Seven large organizations are asking commissioner Janusz Wojciechowski to offer a clear response to this situation as they believe that false data are used to influence the public in this controversial issue. The most vocal are the ones from Poland, the origin country of the current Agriculture Commissioner.
"The industry is also outraged by the fact that in order to justify similar actions their initiators use false data and arguments, which can be divided into three groups.
Meat advertising ban - health arguments

In the case of health arguments, an attempt is made to compare the steps taken with regard to red meat with those taken before for alcohol and tobacco products.

- Meanwhile, meat is not a stimulant, it does not lead to addiction. Scientists specializing in human nutrition confirm that for hundreds of thousands of years meat has been an essential component of human diet, it is a source of protein and amino acids and substances necessary for human development, including vitamin B 12, which is found practically only in animal products, including in meat and iron in the heme form, better absorbed by the human body than in the non-haem form found in plants - breeders indicate.

The industry points out that the theses about the alleged harmfulness of meat apply only to improper processing or eating it while violating dietary requirements. Meat consumed in reasonable amounts is a natural and necessary component of the diet of every human being.

In this case, breeders are accused of enormous water consumption, polluting the environment with animal faeces, emission of carbon dioxide and methane. The industry points out that scientists, however, say the term "water use" in animal husbandry does not exist.

- All the water "used" for meat production is returned to the environment. Animal fertilizer is a natural method of fertilizing fields, which has been used for thousands of years and is more environmentally friendly than synthetic fertilizers. Modern farms use systems that reduce greenhouse gas emissions, and there are also farms in Poland that convert the resulting methane into energy, breeders point out.
Meat advertising ban - animal welfare

Organizations regret the fact that all breeders are being accused of single instances of mishandling animals.

- Meanwhile, for the breeder, animal welfare is integral to income. Sick, stressed and kept in inappropriate conditions animals do not grow, and their treatment or slaughter generates additional costs. That is why breeders increase the comfort of animals, use air-conditioning systems to maintain appropriate air quality and temperature in livestock buildings, use a properly balanced feed for the needs of animals containing natural ingredients that build animal resistance to diseases, ensure the number of animals to feel safe in the herd, train employees, to providing the most humane slaughter conditions possible, the industry points out.

Farmers are particularly bitter about the fact that the planned changes could affect everyone, regardless of the scale of their efforts in animal welfare, environmental solutions, or product quality, and against the farm to fork strategy of supporting sustainable meat production", the organizations said in an open letter, quoted by the PortalSpozywczy magazine.
However, commissioner Wojciechowski said that nothing is clear yet as there is increasing speculation about whether the Commission has decided to stop promotion funds for meat. A statement from his part can be read below as it was posted on Twitter. 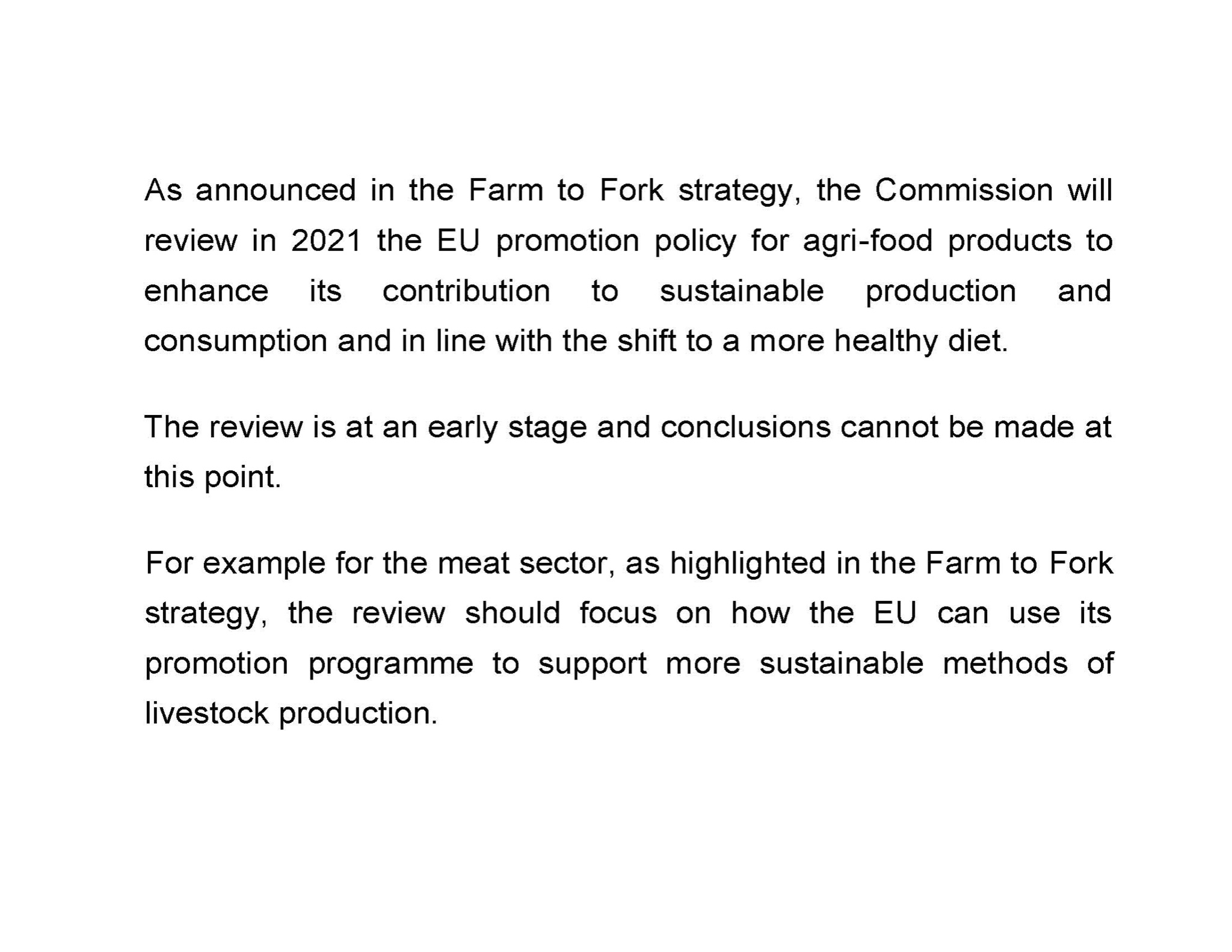 US red meat exports ended the first quarter on a very high note, according to data released by US...

More and more butchers are hired in Spain

Butcher shops in Spain are having a tremendous year, despite the restrictions applied to stop the...

Reverse flow in poultry trade between Romania and Poland

JBS and BRF plants approved for export to South Africa

Brazil hopes to set another record in pork exports