The latest Chinese grocery retail forecast issued by IGD Asia shows that the market could reach a value of CNY15 billion ($2.36 billion) by the end of 2026. Currently, The Chinese grocery market is the world's second-largest but it will overtake the US market (No. 1) in 2023, analysts said.
"With GDP growth ahead of inflation, the economic growth in China is forecast to be, driven by real increase in output rather than rising prices. *By nominal GDP, China has the largest economy in Asia. It is also the only major economy with positive GDP growth in 2020. The country has adopted a strict zero-COVID policy since the pandemic was brought under control in late February 2020. The grocery growth forecast is to remain robust but lower than historical levels. The growth peak in 2018 and 2019 was largely driven by the emergence of new retail and adoption of digital technology,", says the IGD report 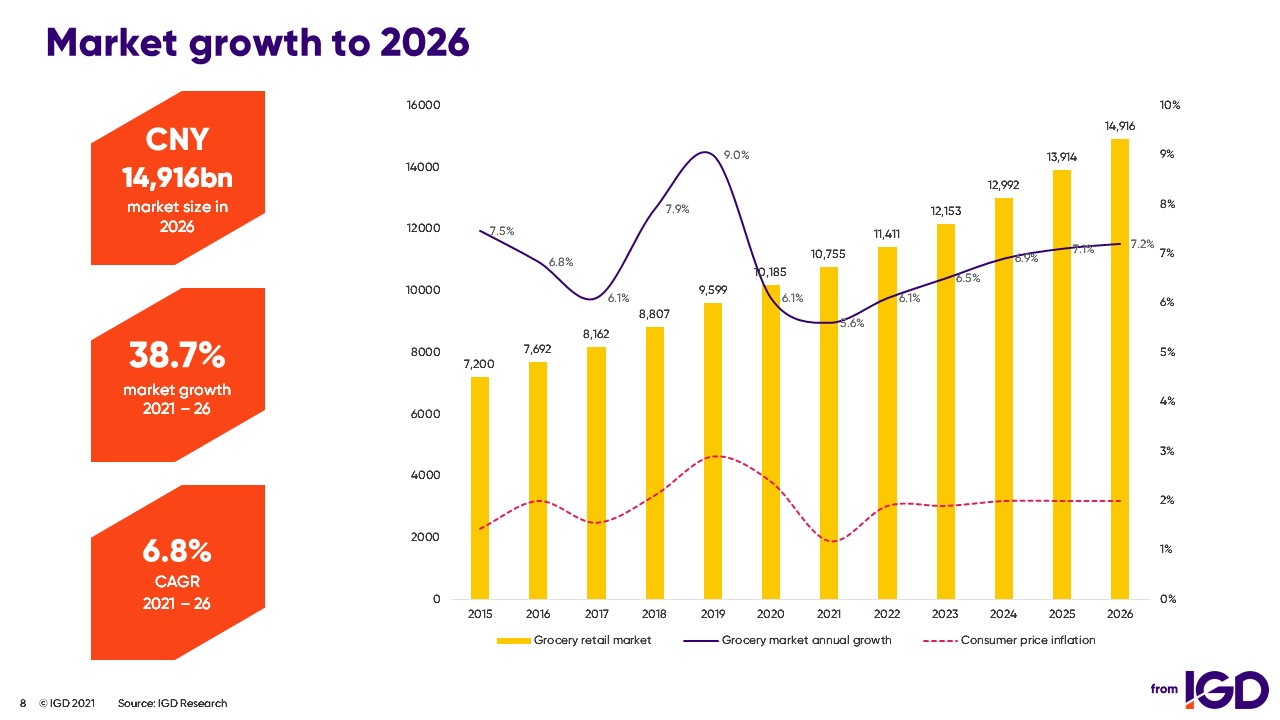 Five key trends will support this growth, according to IGD analysts.

- Ongoing urbanisation: demand for convenience and efficiency continues to drive technology development, change how people shop and influence store formats that retailers are focusing on, for example community stores and premium supermarkets.
- Big data: ecommerce players in China can track purchase behaviour from their hundreds of millions of shoppers to help play to consumer eating habits by giving advise to farmers on what to plant and help reduce waste
- Growth in lower-tier cities: as shoppers in less developed areas have become increasingly sophisticated and used to online shopping, they want better products, higher quality, and more inspirational brands
- Emergence of wholesale: Alibaba has triggered the emergence of wholesale sector in China with its Freshippo X store, launched in 2020. To revive performance of big-box stores, retailers (e.g. Yonghui, Renrenle & Carrefour) are converting exiting stores into wholesale-style formats
- Increased awareness of sustainability: environmental friendliness is playing an increasingly important role in Chinese shoppers’ purchase decisions. China has made a bold and ambitious pledge to reach peak carbon emission by 2030 and achieve net-zero by 2060.
Modern trade is estimated to grow at a CAGR of 8.0%, with development driven by online and convenience channels. Traditional trade will continue to be a vital part of the industry in China, providing food security for rural areas and many smaller cities. However, modern trade in China is very fragmented. The top 10 leading retailers account for only 6.8% of market share in 2021, growing to be 7.8% in 2026.

US Meat prices have surged during the pandemic

According to a special report from the US Department of Agriculture's Economic Research Service (...

The rise of pre-prepared meals in the UK

Sales of red meat pre-prepared meals have grown 2.4% in the last year, with the number of shopper...