Between March and the last week, broiler prices have dropped by 6.5%.

Despite increased consumption of poultry in the EU market, broiler prices have dropped constantly in the last few weeks reaching an average price of €184.65/100kg, marking a decrease of 0.5% compared with the previous week and a 6.5% drop from the average price reported in March. Also, the current value per 100 kg is 3% lower year-on-year (see the first chart below).

Major markets in the region, such as Spain, Italy, and France, have reported switching consumption habits from other meats to poultry during this COVID-19 crisis but that didn't have an influence over prices due to the closure of foodservice in most of the EU member states. Also, is good to have in mind that poultry self-sufficiency ratio in the EU is 106% and a drop in exports reported since January has flooded the market.
Since the beginning of the year, EU poultry exports have declined severely in several third-markets such as Ukraine, Hong Kong, South Africa, and Benin. The only major rise in demand was reported in the Filipino market (+27.7%).
Nevertheless, the market looks the same for other major poultry exporters such as the US and Brazil who are confronted with significant drops in prices in the last few weeks (see the chart below). 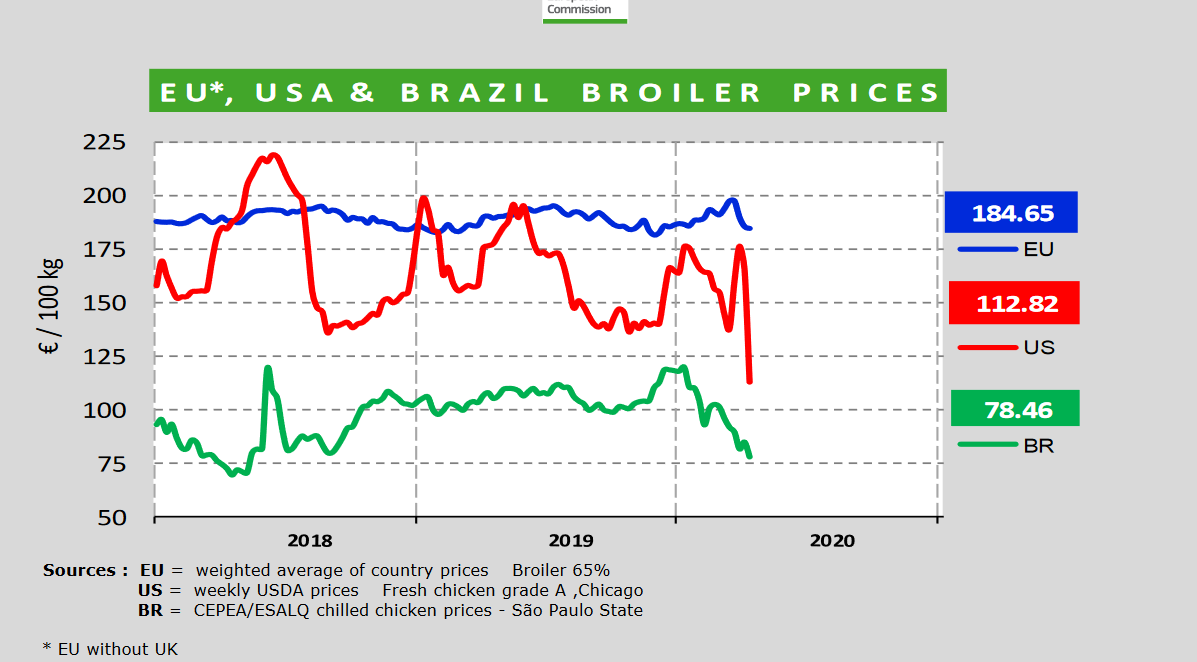 In terms of production, Poland is leading the top, with 17% of total poultry output in the EU, followed by France and Spain, each covering 11%, Germany (10%) and Italy (9%). UK poultry production accounts for 13% if considered a part of the EU market.

No shock-wave in the German pig market

The recent discovery of African Swine fever in three German pig farms had no echo in the domestic...

Poultry to dominate consumption by 2030

Poultry is to represent the clear choice of consumers over the next 10 years, according to a rece...

Brazilian are switching from beef to eggs and chicken meat

Beef consumption in Brazil has dropped abruptly in the last couple of years, while consumers are ...

New seal to show confidence for butchers in Madrid

Poultry imports in the Filipino market may drop - USDA

10,000 birds culled in Ghana due to bird flu outbreak